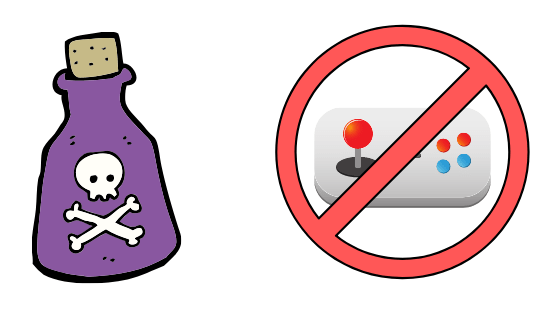 Today, they consider video games one of the best innovations in child and teenage entertainment.

They are inspiring, entertaining, and engaging for the whole family.

Apart from entertaining children, nowadays, games are being played by adults and elderly people for various health benefits.

But most are not aware that video games might have several negative effects, apart from addiction.

There are several harmful effects of video games that most people don’t know.

Why are video games harmful?

Video games are educational, engaging and have many health benefits.

But moderation is important.

Based on some studies, the rate of aggression among school kids is one of the harmful effects of video games.

There is also the rise of bullying in schools that is associated with gaming.

Some years back, the rate of violent behaviors among children and teens was very low.

Television and movies were the common forms of entertainment, and they did not spend hours like they do with video games.

Today, over 70 percent of children are first introduced to gaming as the first source of entertainment.

Based on many findings, video games have many negative effects on kids, more than movies and television.

This means that it can have effects on the kid’s psychology and behavior.

This can influence children to act violently in real life.

And since children repeat these activities for some time, it can affect their mind and behavior.

According to psychologists, doing something continuously, being rewarded and being actively involved are some things that shape a child’s behavior.

This means that playing games for a long time can install aggressive behavior in children more than watching movies or TV.

One harmful effect of video games is the addiction.

Even though gaming addiction is not like alcohol or hard-drugs, it can cause health problems.

Gaming addiction becomes harmful if the children are unwilling or unable to take part in other activities such as playing outside, eating or sleeping.

It also becomes addictive if the child is constantly thinking about the previous or the next game.

Some kids abandon important tasks or their hobbies just to play video games.

Others play games instead of taking part in social or family events.

What are the symptoms of video game addiction?

If you would like to know whether your child has become a gaming addict, here are some behaviors you should know.

Preoccupation–someone who is addicted to gaming will think about the game even if he or she is not playing.

Most of them talk about the game all the time.

Aggression–the gamer shows signs of aggression if he cannot play the game or when he or she loses.

Some kids even play at school, in the street or when they are supposed to be doing important tasks.

Misuse of money–a video game addict can spend a lot of money on gaming products.

They always update hardware and software packages, even after a short period.

In some situations, children spend money inside the game buying potions or experience boosters.

When children spend all their free time playing video games, they are exposing themselves to health risks.

Some of them will skip meals or lose sleep because of excessive gaming.

Kids who spend over 2 hours every day playing games are likely to miss physical activities, which are very important to the growth and development of a child.

Based on recent findings, gaming is the number one cause of childhood obesity.

Children who spend most of their free time indoors playing games are likely to develop poor eating habits and a lifestyle that will eventually lead to weight gain.

Playing video games can be more addictive than movies or television.

Others experience numbness in their hands, elbows, wrists, and shoulders.

Hence, to ensure that your children live a healthy life and reap the benefits of gaming, monitor their activities after playing over 2 hours a day.

When people spend a lot of time playing digital games, their relationship with family and friends might suffer.

For instance, if a kid is spending a lot of time playing games rather than talking to friends or family members, he or she may develop relationship problems.

Similar Topic! How do Video Games Help with Depression?

Based on research, children who are addicted to gaming may not like to associate with people who are not gamers.

This means that they may act aggressively towards their teacher or parent who does not take part in gaming.

Some children will lie so they can play more or argue with their parents over excessive playing.

Even though the games are entertaining and engaging, many of them may lead to an increase in aggressive behavior.

For instance, children who love playing first-person shooter games may adopt a view or be influenced to have aggressive thoughts and tendencies.

Most of the children who are addicted to gaming do not pay attention in school.

Some may constantly think of the next level of a game, while it might exhaust them from the late night gaming.

As a parent, if your child is spending over 2 hours playing his or her favorite game, there is a possibility that their performance in school will drop.

Therefore, parents and teachers have a very significant role to play.

They need to understand the positive and harmful effects of video games to ensure the negative ones do not outweigh the benefits.

The best way is to check the duration the child spends on gaming.

By limiting the play time and checking the game ratings, it can reduce the negative effects.

Besides, parents and teachers should also have knowledge of different games available.

They should also discuss and explain the negative effects of gaming to their children.

With the right video game knowledge, parents and teachers can make a difference by recommending educational games and replacing the violent ones.