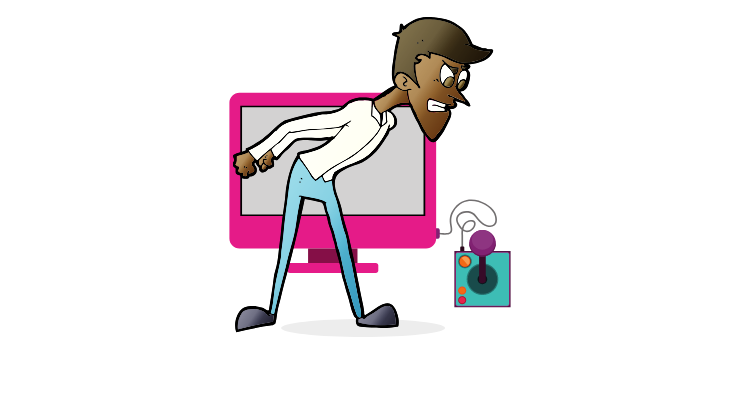 If violent video games caused aggression to players, there would be no benefits in playing them.

If you ask randomly whether there is a relationship between real violence and violent video games, over 50 percent of people believe there is a connection.

Studies show that people think the rise of school-bullying and mass-shootings is linked to gaming.

Even though there are tons of video games for kids to play, most prefer playing the violent ones.

Actually, violent video game sales are over 50 percent of the total gaming sales.

But do violent video games cause aggression?

If you play a violent video game, one thing you will notice is that they are horrific.

It is like the world-war II or two countries fighting each other.

Because of the violence they contain, parents, teachers, and pediatrics believe they make children aggressive.

They believe kids who play violent video games are bullies, violent to girls, and are responsible for mass-shootings in schools.

But video game advocates and researchers have different opinions.

Based on arguments, violent video games can not cause social violence.

In fact, depressed people, angry children, or relaxing adults can use a violent video game to calm their feelings.

Why do critics think violent video games cause aggression?

1. Gaming can cause aggression, school fights, and bullying.

Children who engage themselves with violent gaming are likely to start cyber bullying.

Or bullying at school to mimic the stars of the game.

They can also turn violent to their parents, teachers, or counselors.

2. Based on statistics and reports, individuals who commit mass-shootings were violent video games fanatics.

Police reports show that half of criminals may have been influenced by video games.

3. Playing action video games for a long time can brainwash people to think violence is a way of life.

According to researchers, violent video games have short-term and long-term effects.

One main effect is desensitizing children to social violence.

4. A hero of a violent video game is a violent person.

And since kids would like to be like them, they try to mimic what the stars do.

Some children may understand fake violence from real violence.

5. When exposed, it could lead children to violence at an early age; it can lead to a decrease in kindness or lower sympathy.

6. Some video games promote violence towards children and women.

If gamers are young, the activity can influence them to abuse women or children.

7. Violent video games show that fighting is the best way to deal with conflicts.

Once a player wins a battle, they reward him or her with weapons, more lives, or moved to a higher level.

This shows that violence is praised in video games.

8. Most armed forces use violent video games to train their soldiers.

They show them how to hide, attack and kill.

Although video games can benefit the military, it is not the same case for children.

Because of many cases of mass-shootings in clubs, schools, and other social places, people point fingers to violent video games.

Even though it is important to find the main cause of mass-shootings, it is vital to consider the facts.

Here are some facts that show violent video games cannot cause aggression.

1. The gaming field is one of the fastest growing industries in the world.

This is a clear sign that digital games cannot influence violence.

Even as more individuals all over the world continue buying and downloading video games, the crime rate, violence, and homicides have reduced.

This is a clear sign that social violence and violent video games cannot cause aggression.

2. Many studies have shown that the link between a video game and day-to-day violence is unsatisfactory.

By looking at all angles of gaming, there is no evidence that relates the two.

The prime factors of social violence are family history and mental violence.

3. Besides, the US Supreme Court stated that there was no evidence that showed video games can influence teenagers, kids or young adults to act aggressively.

4. It is not possible for a child to turn violent after playing a violent video game.

According to research, around 70% of children in America are involved in gaming.

With all these activities, only a fraction of gamers are influenced by playing video games.

In fact, reports show that individuals who are involved in gaming become more social, happy and inspired.

This is another sign that gaming cannot cause aggressive behaviors.

5. When someone is angry or stressed, gaming is a strategy that can help.

Children love playing games after school, during school holidays, when stressed, or when they are angry.

Based on studies, the drop in crime rates is because of the result of children staying busy.

One reason young boys love violent video games is that they experience fame, power and other great dreams.

6. Most of the children who play video games can easily understand the difference between virtual violence and real violence.

Kids can tell that a video game is a fun and entertaining form of sport.

This means it is impossible for them to be influenced in any way.

According to children’s health and growth experts, fantasy is vital to a child’s growth.

Similar Topic! Do Video Games Cause ADHD? A Gaming Concern

8. Around 80% to 90% of young boys and girls in many civilized nations are involved in gaming.

Most of them play games using their smartphones.

This means that the problem of mass-shootings has no relationship with gaming.

9. Studies pointed out many factors that contribute to violence.

10. Playing violent video games offers an amazing chance for kids to learn and understand the consequences of violence.

When children are busy playing video games, they have no time to engage in bad habits.

So can video games cause aggression?

Yes, but there are many factors involved like the game rating, type of game and the person playing.

There are many misconceptions about the subject of violent video games and aggression.

However, there is proof that violent gaming does not directly influence children to act aggressively.

As a responsible parent, it is wise to learn and understand the benefits and disadvantages of video games.