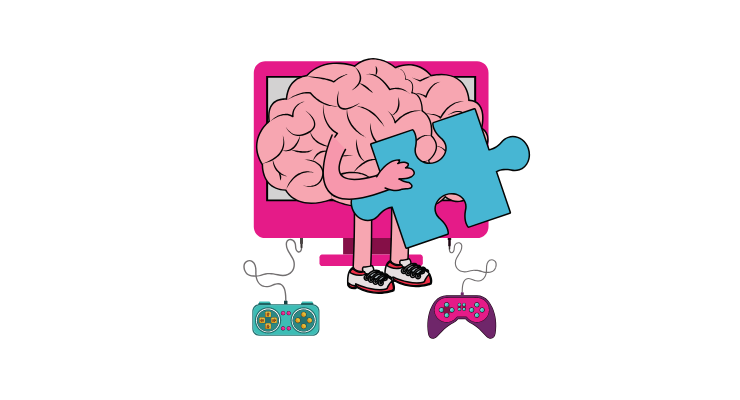 Video games affect your brain in positive and negative ways.

Today, video gaming is one of the most popular forms of entertainment.

Video games are on every device.

In fact, kids as young as two years old can play a simple smartphone game.

Studies suggest that people across the world spend over three-billion hours per week playing games.

We believe that games can be addictive and affect the brain.

Video games have become common to both kids and adults.

The average age of a gamer has risen to 35.

This means more teenagers and adults are playing video games more than ever.

A few years back, people would only play games on desktops and consoles.

But with advanced technology, more and more people can now play video games on their smartphones and tablets.

This means that people are playing video games everywhere.

But is gaming an addictive or a fun form of entertainment?

Are video games fun or addictive?

Before any research, people especially parents believed that video games were as addictive as cigarettes, alcohol or hard drugs.

But this is not the case.

According to research, video games can be addictive, but we cannot compare their effects to alcohol, cigarettes or drugs.

For children or adults who enjoy video games, gaming entertaining is just like watching TV.

There is nothing addictive about playing video games.

Gaming is fun and has many physical and mental benefits.

However, it is important to regulate the number of hours to spend playing a video game.

Too much time in front of the screen can lead to addiction and other health risks.

Do video games affect your brain?

Examiners that investigated how video games affect the brain have stated that gaming can affect your brain positively and negatively.

Gaming changes the parts of the brain responsible for visuospatial abilities and attention.

Below are some effects of video game brain functions.

According to recent studies, there is a relationship between playing video games and decision-making abilities.

There are certain video games enhance decision-making and cognitive flexibility.

This means playing video games on your tablet, smartphone, or desktop can affect brain function.

It is also possible to notice a difference between a gamer and a non-gamer when deciding.

Similar Topic! Are Seniors Playing Video Games for a Challenge?

As a result, it forms memories and fine-motor skills.

A recent study has shown that engaging in strategy video games can help to increase brain gray matter.

The gray matter is a particular layer of our brain that also refers to the cerebral cortex.

This part of the brain organizes, forms and stores memories.

It also helps to connect senses and emotions that include sound and smell to the memories.

When you play video games, it can help to advance parts of brain volume.

An individual’s visual attention level relies on the brain.

According to studies, people who play video games regularly can outshine non-gamers on visual-attention.

However, it is essential to note the video game you play.

This is because the gaming you engage yourself with plays an important role regarding your visual-attention improvement.

It is also believed that action video games are the best when enhancing visual attention.

This is because they have programs for military training and helpful treatments for several visual conditions.

4. Gaming can slow the aging process

Gaming is not just for school kids and teenagers; It has many benefits for adults and seniors.

Playing a video game for just two hours every week can help to slow the aging process in adults.

This is because gaming improves attention and memory.

Based on research, a 60 to 85-year-old gamer can easily outshine a 20 to 30-year-old non-gamer in an attention task.

Most people have linked violent video games to mass shootings happening around the world.

However, there is no backing for their claims.

However , studies have shown that video gaming can increase aggression.

For instance, if you are playing a hero in a specific game, you are more likely to be more aggressive than a person who plays a villain.

Also, people who are easily depressed, upset, and act without thinking will become influenced more than people with personality behaviors.

It is a surprise to many people that video game therapy is a legitimate treatment.

If animals can heal mental problems, then video games can do just as well.

This is because we have games in many gadgets and there are various types of video games.

Playing a video game is just like having a one-on-one counseling session with a person.

Playing games can act as therapy to kids and teenagers in a smart and fun way just like traditional counseling.

It can help depressed people and other mental issues.

Spending a few hours playing your favorite game can benefit your brain more than other types of therapy.

Though physical activities are very important for the brain and for your general health, gaming has emerged as one great form of exercise for the brain.

Many studies have confirmed that video games can be a reliable strategy for improving memory.

Video games affect your brain by enhancing your mood and treating depression.